My website was hacked some months ago and everything disappeared. HORRID!  Now it’s time to catch-up, but where to begin?

I’ll start with the biggest news of the year, The ODYSSEY! The War that Saved My Life by Kimberly Brubaker Bradley was nominated for The Odyssey Award. Such a wonderful book so worthy of the accolades and awards it has been receiving and I feel fortunate to have been the narrator of such a powerful story. 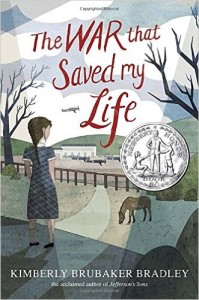 Nine-year-old Ada has never left her one-room apartment. Her mother is too humiliated by Ada’s twisted foot to let her outside. So when her little brother Jamie is shipped out of London to escape the war, Ada doesn’t waste a minute—she sneaks out to join him.

So begins a new adventure of Ada, and for Susan Smith, the woman who is forced to take the two kids in. As Ada teaches herself to ride a pony, learns to read, and watches for German spies, she begins to trust Susan—and Susan begins to love Ada and Jamie. But in the end, will their bond be enough to hold them together through wartime? Or will Ada and her brother fall back into the cruel hands of their mother?

This masterful work of historical fiction is equal parts adventure and a moving tale of family and identity—a classic in the making.

There have been so many wonderful books to narrate this year already! Fiona Barton’s The Widow. Could. Not. Put. It. Down. I am a huge fan of British Crime Dramas; Broadchurch, Happy Valley, Sherlock, Luther, The Fall, Hinterland, Vera…the list goes on and on so when The Widow landed in my lap, I was captivated.

“Both a taut reconstruction of a crime and a ruthless examination of marriage…A smartly crafted, compulsively readable tale about the lies people tell each other, and themselves, when the truth is the last thing they really want to know.”—Entertainment Weekly 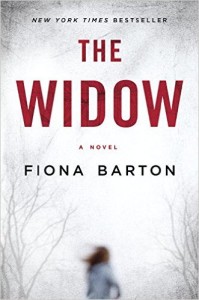 I was happy to return to the exquisite writing of Julie Berry and her masterful book, The Passion of Dolssa. Last year I won the Odyssey Honour for Julie Berry’s Victorian romp, The Scandalous Sisterhood of Prickwillow Place. The Passion of Dolssa is a multi-narrator effort with Fiona Hardingham (who I have appeared on several books with) and Allan Corduner. 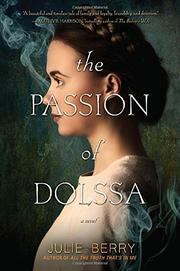 A generation after the horrors of the Albigensian Crusade, the elders are still broken by memories of entire towns put to the sword, but the younger folk, such as Botille and her sisters, focus on the present. After a childhood on the run, the sisters seek stability in poverty-stricken Bajas: brewing ale, telling fortunes, and helping their neighbors. Bajas is depicted through a scattering of third- and first-person viewpoints (but primarily Botille’s) as a town where all look out for one other as a matter of course, where goodness is found in prostitutes, fishermen, hustlers, and drunks. Bajas’ generosity is challenged when Botille discovers Dolssa, an injured, spirit-shattered girl on the run. Dolssa’s a convicted heretic for speaking publicly of her intimate relationship with “her beloved…Senhor Jhesus.” She trails miracles like bread crumbs, from a never-emptying ale jug to repeated uncanny cures. The villagers venerate her, but the arrival of the Inquisition—in a world where branding and burnings are mild punishments compared to recent history—puts their goodness to the test. The slow build reveals Botille as a compelling, admirable young woman in a gorgeously built world that accepts miracles without question. The medieval Languedoc countryside is so believably drawn there’s no need for the too-frequent italicized interjections in Old Provençal that pepper the narrative.

In other news I filmed a few delightful commercials. Click on the pictures below (which have links hidden in them. MAGIC)  if you’re interested in watching. 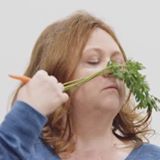 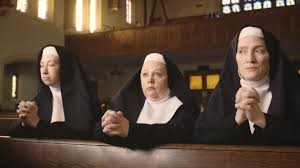 Thank you for stopping by,