This is a piece I wrote and performed for a live show called, Rant & Rave. We were given a theme and a word count. Our theme was “fire”. 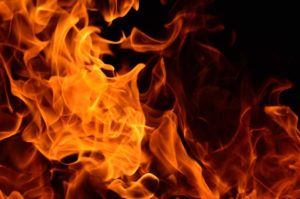 I might be a witch. It isn’t something I’ve tried to achieve. There’s been no study, no cast-iron cauldrons, no musty spell-books with dog-eared pages where love spells were hand-written by some great-great-grandmother. But whatever it is, it started young.

As a little girl, my Great Aunt and Uncle would collect me from primary school on Friday afternoons and walk me home along the Lancashire moors. In my mind, Great Aunt Ada and Uncle Alf were in a class of their own; regal, distinguished with an air of aristocracy. They had a brief but significant appearance in my childhood. My Mum and Dad would later trade in the moors and her ghosts for the sky rises of Toronto and vacant strangers would fail miserably at standing-in for a Great Aunt and Uncle I would never see again. But back then, they would arrive at St. Barnabas with purpose, their pressed trousers tucked neatly into their wellington boots. Aunt Ada wore pearls and a sweater set, while Uncle Alf wore a knitted vest and blazer. They would be accompanied by their wheelbarrow. Their wellington boots were in place of their suede shoes which could not be sullied by the horse manure they collected on the heath. Manure for their very English garden.

I treasured those forays into the Lancashire countryside. They were both interesting and frightening. Interesting because my Great Aunt and Uncle, who seemed so very cultured, were literally mucking about on the moor and frightening because of the Witches dell we had to pass on our way to their house. The dell, a small steep valley carved into the English moors, shimmered with danger. Uncle Alf would whisper stories of witches hiding in secret caves and I would stare down into the dell, feeling the cold of that trapped place reaching up to pull me down. I knew that if I tumbled into that dark chasm there would be no escape. Those recycled stories brokered permanent residence in my dreams.

I can still recall the recurring nightmare that held me hostage in which witches came and took the place of my Mother. In the dream, no one noticed the switch but me. What was more terrifying was that the witches knew I knew. They would slyly cut their eyes at me while my real mother was tied up to a beam in the basement and here is where I pause. Basements are, in my experience, a decidedly American thing. In England, we are cold and damp above ground, why on Earth would we ever venture beneath it? Was I, as a child, slipping into the collective unconscious and emerging with a symbol that shook me in my own little wellington boots?

The internet offered up this interpretation of basements in our dreams, “…[a] place where your conscious mind contacts hidden powers, universal wisdom and even other minds.”

I dreamt of witches and in turn became a witch; I think of you moments before your name lights up my phone. I am the finder of things you have lost. My stepmother calls me radar. Keys, phones, wallets, I can feel them tucked down the side of a chair or burrowed under piles of clothes. I can tell you if the hiding space is light or dark, big or small, near or far. I have become a party trick, answering calls in the dead of night from panicked friends who have lost something significant. I am secretly pleased when I feel the pull of a lost object, even more so when the object is found but I am terrified of ever allowing my hubris to extend to finding the living, or worse.

Many years ago, my family and I took a lazy afternoon trail ride. For three hours we rode horses through the coarse desert of Southern Arizona. A coyote crossed our path and my stepmother called out, “coyote trickster medicine is afoot.” My sister and I laughed and rolled our eyes but something pulled me inward and vigilance replaced my cynicism. When we returned to the stables, my stepmother had lost the car key. She had tucked the single key into her brassiere as she apparently had no pockets and we were not allowed to bring anything with us on the ride. “Trickster medicine” she trilled, as if this were some delightful joke set upon us by ancestors that were not our own. The stable was closing, the sun reclaiming any light or heat it might offer and cell phones were blissfully, to some, years away from world domination. In a nicotine-withdrawal rage I kicked and cursed at the dusty ground, caring little for how we would get home and more for my need to access the cigarettes sitting on the front seat of the impenetrable car. I stomped and swore and churned up a thick cloud of dust and in so doing, unearthed the hidden key. I stood gawping at that unmistakable piece of metal and felt as I did staring down into that witches dell. In the 1600’s I would have burned. In the 1200’s I surely would have burned and in 1993, I very nearly burned.

I was living in the basement of a shared Seattle townhouse. After years of living in America, I had become inoculated to my fear of rooms below the ground and instead found myself craving the burrowing inward the room appeared to offer. There were little windows toward the basement ceiling that were level with the pavement. My view was of splashing rain and scurrying feet. One night, I sat in bed and stared at the wall shared with the neighbouring townhouse. The more I stared, the more frantic I became. There was no rhyme nor reason for my fear but my heart bellowed in my chest as if doom itself were hacking through the wall. I wanted to leap out of bed and pound on the wall, warn the occupants next door, but of what? That once I dreamt of witches? That there is a dell in Darwen, Lancashire that has the draw of a thousand magnets? The hours passed and what started out as a low keening became a desperate yowling. Cats. The witches familiar. I rocked in my bed as the cats sang their terrible song, driving me to escape into sleep. I was awoken by rubber boots running back and forth outside my little windows. Was it time to push the wheelbarrow through the cold fog? Time to skirt an ancient place that had bewitched me? As the boots outside became a blur of movement there was an ungodly pounding above. FIRE FIRE GET OUT NOW!

I could no longer hear the messengers on the other side of the wall, they had perished in my place while I hid my eyes, too afraid to see what was waiting in that dell.

My roommates and I stood outside, huddled together in the Seattle rain that was as constant as our own breath, and watched the house connected to ours burn. I dared not look at the faces of the firemen, dared not look at what they carried through the smoke. My eyes stung, my lungs felt heavy and I could feel heat rising off my skin. I sent my shame back into that burning house to lay itself down on the dying embers. I longed to be back on the moors feeling the cold tendrils of fog snake around my ankles. I wanted to stand on the edge of that frightful place and let it pull me down. This time I would keep my eyes open.

The fire, we would later learn, started in the basement. But I could have told you that!

I was suddenly hit the other day that the night terrors I am plagued with, a different recurrence than the witches of my childhood nightmares, began in that basement. Back then I started waking up and seeing the addition of one terrifying thing in my room; water flooding the floor, tree branches clawing their way through the ceiling, people staring at me inches from my face. I believed that because I was in the basement, the darkness in the world was seeping below the ground, infecting my dreams. I would gladly let the keys and wallets and phones of the world remain lost if it meant closing and locking that basement door forever.