This has been a wonderful few months of narrating books with remarkably bold, courageous and oftentimes hilarious female characters at the helm. Anyone who knows me will know I am referring, of course, to Flavia de Luce but there have been some welcome new additions to the canon of strong, wickedly smart literary heroines. I will commence with Flavia as I can’t imagine she would want to go second.

The Grave’s a Fine and Private Place by Alan Bradley. This is definitely one of my favourite books in the Flavia de Luce series and I think readers and listeners alike will understand why. 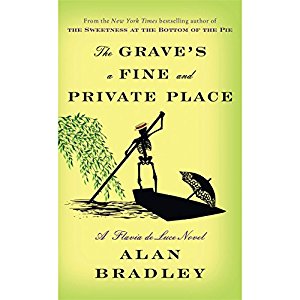 In the wake of an unthinkable family tragedy, 12-year-old Flavia de Luce is struggling to fill her empty days. For a needed escape, Dogger, the loyal family servant, suggests a boating trip for Flavia and her two older sisters. As their punt drifts past the church where a notorious vicar had recently dispatched three of his female parishioners by spiking their communion wine with cyanide, Flavia, an expert chemist with a passion for poisons, is ecstatic. Suddenly, something grazes her fingers as she dangles them in the water. She clamps down on the object, imagining herself Ernest Hemingway battling a marlin, and pulls up what she expects will be a giant fish. But in Flavia’s grip is something far better: a human head, attached to a human body. If anything could take Flavia’s mind off sorrow, it is solving a murder – although one that may lead the young sleuth to an early grave.

The second book I just completed is the first in what I hope will be a looooong series. A Girl Like You: The Inspector Howard and Henrietta Series by Michelle Cox. I love a good mystery and this book is steeped in rich characters and intrigue. You can find the audio on Audible (click here) 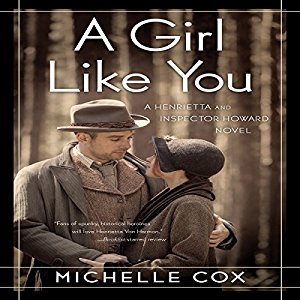 Henrietta Von Harmon works as a 26 girl at a corner bar on Chicago’s northwest side. It’s 1935, but things still aren’t looking up since the big crash and her father’s subsequent suicide, leaving Henrietta to care for her antagonistic mother and younger siblings. Henrietta is eventually persuaded to take a job as a taxi dancer at a local dance hall – and just when she’s beginning to enjoy herself, the floor matron turns up dead.

When aloof Inspector Clive Howard appears on the scene, Henrietta agrees to go undercover for him – and is plunged into Chicago’s grittier underworld. Meanwhile, she’s still busy playing mother hen to her younger siblings, as well as to pesky neighborhood boy Stanley, who believes himself in love with her and keeps popping up in the most unlikely places, determined to keep Henrietta safe – even from the Inspector, if need be. Despite his efforts, however, and his penchant for messing up the Inspector’s investigation, the lovely Henrietta and the impenetrable Inspector find themselves drawn to each other in most unsuitable ways.

Last, but definitely not least, I returned to a favourite series of mine, The Chess Queen Enigma: A Stoker and Holmes Novel  by Colleen Gleason. I will add a link to the audio as soon as it’s available on Audible. 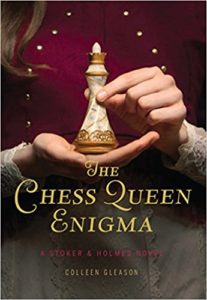 Evaline Stoker and Mina Holmes have reluctantly agreed to act as social chaperones and undercover bodyguards for Princess Lurelia of Betrovia, who has arrived in London to deliver a letter that details the secret location of an ancient chess queen that’s been missing for centuries. But when the letter—which will heal a centuries-old rift between England and the Betrovians—is stolen out from under Evaline and Mina’s watchful eyes, the two girls are forced into a high-stakes race to ensure they find the chess queen before anyone else does.

I can’t believe it’s almost Thanksgiving! I know everyone says that every year, and doubtless I’ll say the same about Christmas, but this year I am saying it with dazed eyes and mouth agape. I am looking forward to sinking into some good books (read for personal pleasure as opposed to business pleasure) which the holidays allow me to do. And the best part is, I shall be reading those books by a cold and windy sea.