Well, I had started out writing just Chapter Ones but then this popped out and I think it is Chapter Two and belongs with Chapter One (the second). 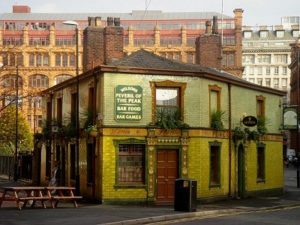 They drove to the pub in relative silence. How do you begin a conversation that needs to cover a lifetime? Where do you start? When they did speak, it was sporadically, in fits and spurts as if they were old-fashioned wind-up toys that couldn’t seem to kick into full gear. They chatted benignly about the shit Manchester weather, the hotel and it’s questionable surroundings, her flight. She looked out the window trying to count the raindrops on the glass. She silently repeated the names of shops and streets as they glided past and smiled at the corner of Coronation Street and Regent Square, wishing she could ask him to stop the car for a photo but thinking it low on the priority list of things she wanted to ask of him.

The pub, apparently a favourite haunt of his, was packed. Heaving was the word she dredged up from her British vocabulary. A football match blared from a big screen and patrons sat around it as if they were at home in their living rooms. She loved that sound, the on-screen cheering of football fans particular to that sport, the accents of the commentators rich and varied. Sometimes at the gym, she would linger on the sports channel broadcasting a football match. She didn’t care who was playing or where. It was the sound she was after. She would quicken the pace on the treadmill and let the rolling voices carry her forward as if she could walk her way back home from California, right through the television screen and out onto that green, green pitch.

He ordered her a pint of Stella and an orange juice for himself.

“Me ticker” he offered, almost apologetically, nodding at his drink. He’s broken his heart she thought, and looked over at the carvery station in the corner. She was starving and hoped that dinner was on his agenda. He introduced her to a toothless character sitting at the bar. They joked around, elbowing each other and whispering conspiratorially about what, she didn’t know. It could have been the football score or the meat on offer at the carvery or even her for that matter, the daughter that emerged without warning.

“Watch out for this old codger mind” her Father says, winking and giving his friend a little shove.

The friend slides off his bar stool and puts his arm around her.

“Don’t you worry ’bout me my girl” he says, giving her shoulder a squeeze, “though I daresay she looks like you an’all. Can’t half tell she’s yours Jacob.” Her Dad nods and she feels initiated, arrived. That’s all it took then, one old drunk in a pub connecting them together? The bar erupts as a goal is scored and she takes the opportunity to sidle over to the carvery.

“You ‘ungry?” he asks, joining her in front of the glass. They size up the options on display; roast potatoes, Yorkshire pudding, Roast beef and gravy.

He nods at a man in a tall white chef hat manning the carvery station and holds up two fingers.

“Alright Jacob?” the chef asks and then nods at her saying, “that her then?”

“The one and only, spending all me pension too by the looks of it.”

She suddenly feels small and acutely guilty, ashamed almost, that she should cost him anything. It will be the only thing he will ever give her. Wait, that’s not entirely true.

When she was sixteen, living in Richmond, British Columbia, he wrote to her Mum through her Mum’s sister Carol. He had asked if he could send a gift and a little letter. The decision was left up to her.

The Frankie Goes to Hollywood record arrived for her birthday, clearly advice had been given, along with a handwritten letter and several photographs. The record was too perfect. She wanted to hate it, to toss it carelessly on the floor as if to say “see, he doesn’t know me” and it’s true, he didn’t know her, but the album was too close to her teenage heart. She hadn’t yet learned how to play the long game. She was still impulsive and easily placated. The letter was as you would expect; not ready, terrible Father, not you, blah bloody blah. The pictures though. Cut from the same cloth she would say twenty years later and there was the original pattern, in those pictures; red hair, freckles, big eyes. Not a tall man but a stocky one, sturdy. In every picture he was having a lark, laughing into the camera, cigarette in one hand, what looked like scotch or whiskey in the other. In one picture he was on a yacht, deep sea fishing, in another he was in Acapulco, wearing a sombrero, looking like a lad about town. The picture that she kept returning to was the one from San Francisco, that unmistakable bridge in the background. He was standing with his legs wide apart, hands on hips, his shirt open revealing his chest. His face was in profile and he was wearing aviator glasses. He was smiling at something to his left. The bridge was directly behind him and because of his pose, it almost looked like a challenge; that English man against that golden bridge.

He was so close, she had thought. San Francisco to Richmond, British Columbia. 944 miles. 15 hours and 42 minutes to drive. 322 hours to walk.

She wants another beer but dares not ask him for it. She excuses herself and goes to the bar to pay for her own beer and the first of things she will buy him. Less than two hours and she has established her role as “good girl” and it makes her feel sick with the smallness of it. Wearing the familiar cloak she thought she hadn’t packed but evidently, comes sewn into the skin. It’s only an orange juice and a beer, she tells herself, for God’s sake stop reading into everything but really, she isn’t listening.

They leave the pub and drive slowly through a neighbourhood he covets. He has been on a waiting list for a council flat in this district for years. He likes the shops better and the church where he volunteers making papier mache displays is here. He takes her past the church, pointing through the car window at the steeple. He is frustrated with the waiting and the red tape and he natters on about it but she is thinking about that beer and orange juice. She is thinking that her life is worth a pint and a Sunday dinner and a Frankie goes to Hollywood record she never thought to keep.