July has been a banner month!

In mid-July I attended the ALA Conference (American Library Association) in Orlando, FL. I always love attending ALA because it’s a conference surrounding and supporting a united love for books with authors, librarians, agents and publishers in attendance. I spoke at the Author’s Tea and read a passage from Alan Bradley’s,  As Chimney Sweepers Come to Dust. I also spoke at the Odyssey Awards where I was honoured with the Odyssey for Kimberly Brubaker Bradley’s award–winning book, The War That Saved My Life. In fact, I was able to spend a fair amount of time getting to Know Kimberly and her lovely family which was a rare and humbling treat for me as a narrator. It was my first time in Florida and while it was blisteringly hot, the weather matched the geography perfectly and I was treated to a torrential downpour. I ran to the pool-side bar with my book and sat outside, under cover, and delighted in the rain and thunder and lightening. It was one of the highlights of my trip which is a testament to my membership in the pluviophile club (I currently am the only member so if you’re interested..)

2016 Odyssey Awards Speech: Jayne Entwistle, narrator of THE WAR THAT SAVED MY LIFE

As soon as I returned from Orlando, there was the most marvelous message waiting in my email in-box; the new Flavia de Luce had arrived and while I am absolutely bursting to talk about it (for obvious reasons I can’t) I can say this: OH BUT IT’S FABULOUS!!!!!!!! How happy was I to return to the musty halls of Buckshaw and ride, vicariously of course, dear old Gladys. I vacillated between reading it slowly so I would never have to leave that world and gobbling it up to find out what happened next. The new book and audio recording will be released in September! Yaroooooooooo! 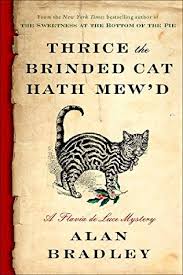 And then…as if July hadn’t provided enough entertainment, I was off to the San Diego Comic-Con with Penguin Random House to speak on a Grimm’s Fairy Tale’s panel. Famed and prolific narrators, Scott Brick and Kirby Heyborne joined myself and VP of Content at Penguin Random House, Dan Zitt on the panel where we each read our fairy tale and discussed the project. If you haven’t heard the new audio release of Grimm’s yet, it’s a must. I am humbled to be included among such outstanding narrators including Alfred Molina!!! 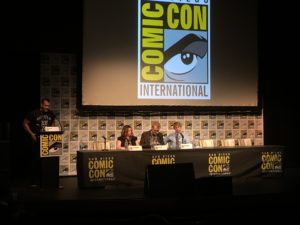 Comic-Con, my first, was madness! My taxi driver said 130,000 people descend upon San Diego for the weekend. Every which way I looked there was something to gawp at – mesmerizing! I doubt I would have ever experienced it of my own accord. Next time I go back, however, I want it to be for a prestigious panel I am on in the legendary Hall H, where people sleep outside to get in line for admission. One can dream, right?